A trip to St. Petersburg, Russia was always high on my list of travel priorities.  The reason being that my father, Otto, in the early 1900’s spent several years in and around St. Petersburg while serving in Tsar Nicolas II army.
We arrived in St. Petersburg via bus completing a Baltic tour which culminated in this beautiful city. It was Autumn, the leaves were falling from the trees and a sweater was needed to stave off the chill already in the air. We checked into a magnificent hotel called the Angleterre where there were a few individuals who understood and spoke a very limited amount of English which was, by far, much superior to my Russian.
There is a saying in Russia which goes something like this: “If it glitters and you think it might be gold, in Russia, you can be sure that it is gold.” In the six days that we  spent there, I often thought of those words which became very meaningful.
Just across the street from our hotel was located St. Isaac’s Cathedral

and so we visited it several times. It is known as the third largest domed Cathedral in the world. The exterior tall support columns, the huge gilded dome and the impressive mosaics in the interior are truly amazing.
We visited the Peter and Paul Fortress which was founded by Peter the Great in 1703.

The SS Peter and Paul Cathedral which houses the tombs of the Romanov Monarchs, identifies itself from many directions and from great distances, by its slender gilded spire which projects vertically into the sky for about 120 meters.
We managed to visit the Hermitage Museum (the Winter Palace) twice during our six day visit to the city. The Winter Palace was the official residence of the Imperial family until the 1917 Russian Revolution.

Today the Hermitage Museum houses an impressive collection of original works of art ………….. Matisse, Van Gogh, Picasso, Rembrandt, Rubin, Leonardo de Vinci, Raphael, to name a few. A month of daily visits would not even begin to enable one to view it all. We had thegood fortune to attend the Russian ballet, Giselle, also in the Theatre at the Hermitage.
My dad had spoken of a Lutheran church that he often attended while in St. Petersburg and I believe, I found it. He had told me that it was on the Nevsky Prospect which is the main thoroughfare of the city and yes, there it was on the Nevsky Prospect.… 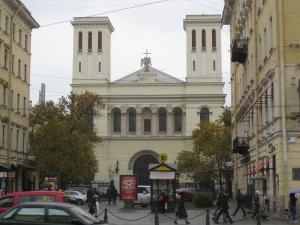 ……. it was the only Lutheran Church I could find on that street. Originally, the land had been donated to the Lutheran parish of St. Petersburg by Tsar Paul I in 1727 and a church had been built. During the time of communism, the church was taken over and used for different things ……. 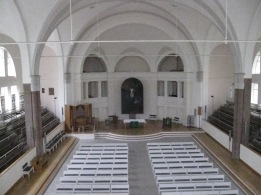 …… storage place of theatre decorations, vegetable storage, a swimming pool. It was finally returned to the Lutheran parish by Yeltsin in 1993 and is now being restored.
A trip to Pushkin (Tsarkoye Selo) was definitely worth visiting. This palace was built for Catherine I, Peter the Great’s second wife. Catherine’s palace is a perfectexample of Russian baroque architecture………… bright turquoise exterior with rows of

white columns and pilasters with gold baroque moldings. However, the outside is quite modest in comparison to the interior! That is literally amazing and the glitter of gold is almost blinding. Room after room is decorated with gold, 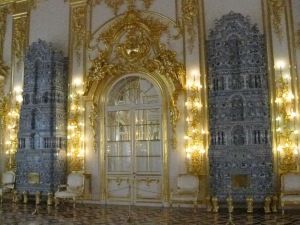 To top it all off, there is a special amber room where picture taking is forbidden. The entire walls in the amber room are a mosaic of different shades of amber. It is no wonder that there was a Revolution in 1917!
My dad, who was part of the cavalry division of Tsar Nicholas II army, often spoke of the barns where the horses of the cavalry were housed and of the exercise and practice fields for the cavalry. He had spent much time there, attending to the horses that served his Pokovnik. I searched for this area and it was difficult, as everyone I attempted to get information from either didn’t know, didn’t understand what I was looking for, or lead me astray.

Finally, on my last afternoon in St. Petersburg I found someone who immediately directed me to the Field of Mars. Upon arrival we were met with a multitude of scaffolding and a heavy green netting covering all of the old barns. I guess I will have to return in 5 years to see what has happened behind all of that.
Other adventures and explorations in St. Petersburg included a visit to the Church of the Savior on Spilled Blood,

a cruise on the Neva River and the waterways of St. Petersburg, an evening concert of Russian Folklore dance, a visit to St. Nicholas Cathedral which is a functioning church, a shopping trip to the ‘Red October’ where I bought my ushunka hat, a visit to Yusupov’s palace and a visit to a Jewish synagog where a rabbi soloed. 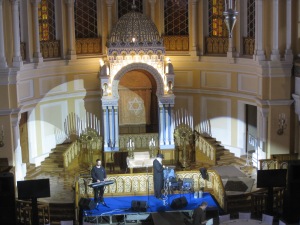 St. Petersburg truly was very aptly described as the “Jewel of the North” and if you ever have the opportunity to visit Russia, St. Petersburg is a must for at least a minimum of four days.

A map of our travels