Our trips to Mexico started years ago, probably about 1982, when we actually won a trip at a community elimination draw and dance ( the last ones on the dance floor are the winners) where draws made from a hat eliminated the dancers.  Can you imagine being the only one not drawn ……………… that was us!  Shows you just how lucky or unlucky I really am!  We left our daughters with relatives and away we went for a week to Mazatlan during the Easter break from school  and had a great relaxing week.  From that time forward, we have visited and spent a great deal of time at many other places in Mexico (Puerto Vallarta, Cabos San Lucas, Sayulita, Guadalhajara, Cancun) and now since we have retired, Manzanillo, Mexico really has become our winter home.

Of all the places in Mexico that we have been, Manzanillo certainly is our favourite and so for the past 5 years, when the snow comes to Mabel Lake, 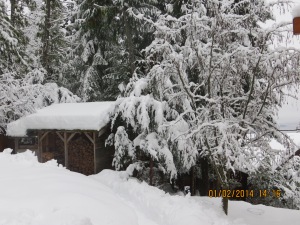 we head to Manzanillo for two or three months.  It can be likened to going home, especially since we have stayed in the same beach front condo for the past several years 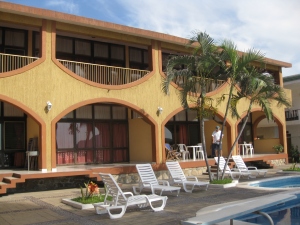 First of all, I feel very safe there.  With all the media hype about safe places to travel, Mexico has not exactly been on the list of Ten Safest Places in the world to visit.  There are very few tourists travelling into Manzanillo, with even many cruise ships during the last few years choosing other ports, those that do come, are mainly Canadian and perhaps that is one of the reasons I feel so safe there.  There is definitely comfort when you find your countrymen in foreign lands.

The warmth of the sunshine, the Pacific ocean and the miles of sandy beaches are certainly the main attractions but not the only ones.  Whether one likes to walk, swim, snorkle, whale watch, 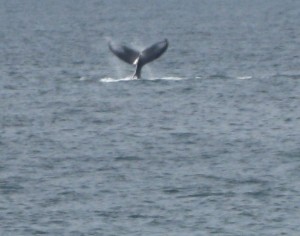 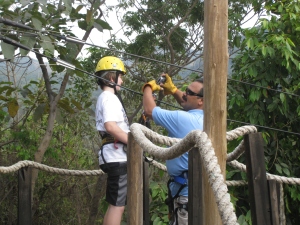 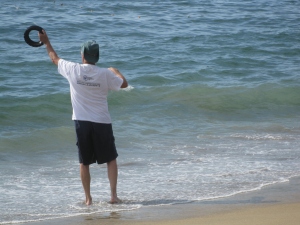 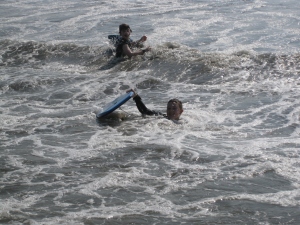 etc. all can be found at or near to Manzanillo.

We love to live right on the beach so we can hear the ocean continually striking the sand ……………… sometimes crashing and sometimes softly lapping the shore.  The sandy beaches which stretch into infinity are great places on which to walk, reflect and recharge those worn down batteries.  Sometimes I am the only one on a beach for miles and miles.

The sunsets in the evening are indeed spectacular and living on the beach I have taken more sunset pictures in Manzanillo than all the rest of my pictures put together.

I enjoy taking pictures of flowers and in Manzanillo one is never disappointed.

Market days are always interesting, colourful and inexpensive.  Some vegetables are not familiar so it is always a challenge to find an English speaking person who will tell you what to do with certain produce. 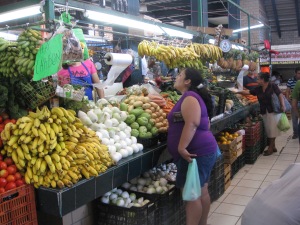 Prices for fresh produce that is locally grown are cheap!  One kilogram of fresh red Roma tomatoes will cost a mere 8 pesos.

While in downtown Manzanillo, an interesting place to visit is the ‘hang-out’ of the iguanas. 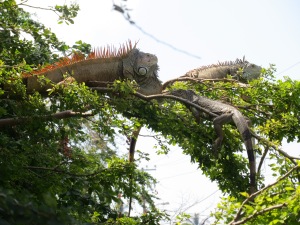 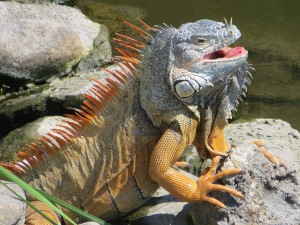 Oh, there is the odd crocodile there as well …………… 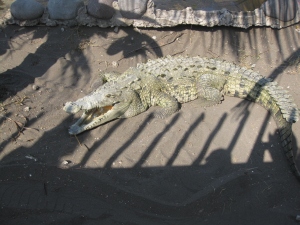 we were lucky to see one.

Manzanillo is a port city and a very important one for all of Mexico.  Coming and going to the port every hour are barges

from many countries of the world …………………. some loaded with crates of goods, and some empty coming in to load up.

Cargo is carried by rail to Mexico city.  There are now only a few cruise ships which also come into port however, a few years ago, cruise ships were a weekly occurrence.

A single day trip to a nearby town can be a real adventure especially if you ride the local buses.  There are plenty of English speaking guides who will tour you by taxi or suburban for a reasonable price.  We got to know one, Gabrielle, who has excellent command of English, knows the area extremely well and who can talk informatively about the flora and fauna of the area. 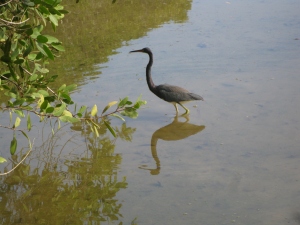 Gabrielle toured us to the turtle farm

where we got to release baby turtles

and watch them make their way down the sand and into the ocean.

We have been to Colima, capital city of the State, several times.

There we explored the ruins of the Comala people in La Campana.   The ruins there are just being unearthed as they were discovered only recently when Walmart was beginning excavation for the construction of a new store.

Fortunately , but unfortunately for Walmart who was required to change its location, the discovery of these ruins has created a new tourist attraction. 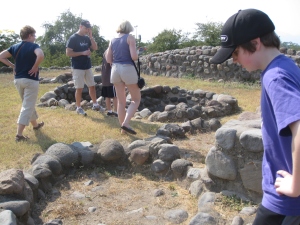 Near Colima there is an active volcano, called Volcan de Fuego 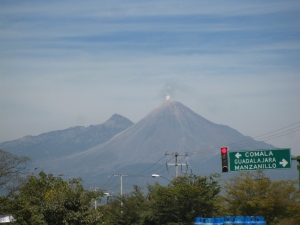 We have seen it many times, but one day as we were looking at it, it ejected a puff of steam.  According to Wikepedia, this volcano is the most dangerous active one in all of Mexico as it has erupted many times since 1988.  The most recent eruption occurring in 2014 was quite dramatic and did make the international news.  I need to change this again – this volcano erupted again in Feb. of 2015 – a huge eruption of ash and nearby residents were put on an evacuation alert.

While in that part of the country, we went to Comala for lunch 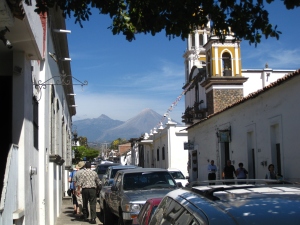 We were in Manzanillo for Christmas one year and had so much fun with some of our family doing all sorts of things, but a highlight for each of us was to make a pinata.

We filled them with goodies and then exchanged names. It really was a fun filled Christmas! 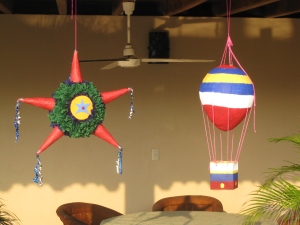 A map of our travels